I Was Thinking in the Shower....

A short history of the shower 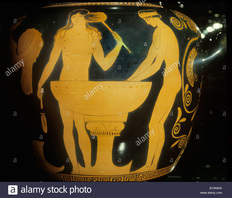 Although I was educated to believe our Western Civilization has its roots in Ancient Greece, I am only now, in my Sixties, beginning to appreciate how advanced they really were, see my blog Advanced For Its Age - They Had That Then?﻿﻿ for a look at their inventions of the mechanical organ, and even a washstand automaton that dispensed a basin of water AND a pumice stone for washing with!)


Apparently the early Greeks did not have hot showers. They did have hot baths, with large complexes and gymnasia to accommodate them. It should be noted that there was not a lot of soaking in tubs, washing was more usually done standing around a large raised bowl on a stand. See R. People could spend all day at these facilities, lingering and socialising.


This cultural practice was also followed by the Romans, who took it up in a big way. Rich patrons would curry favour with the public by sponsoring free entry days to the very popular Thermae: -

"In many ways, baths were the ancient Roman equivalent of community centres. Because the bathing process took so long, conversation was necessary. Many Romans would use the baths as a place to invite their friends to dinner parties, and many politicians would go to the baths to convince fellow Romans to join their causes. The thermae had many attributes in addition to the baths. There were libraries, rooms for poetry readings, and places to buy and eat food. The modern equivalent would be a combination of a library, art gallery, mall, restaurant, gym, and spa."  - Wikipedia on Thermae.


The early Greek's general attitude did include a certain ambivalence, they believed in cleanliness, but thought this should be done with cold water and showers, and it was thought that too much hot bathing was an indulgence and effete. History and more cultural attitudes are explained in more fascinating detail here at the Hellenica website. (It constantly astounds me just how much is known of these ancient times. I guess we have to thank the invention of writing, and a couple of thousand years of diligent book preservation.)


Postscript 02/07/16 It appears someone has thrown cold water on the idea that Roman bathing was a healthy thing. Dr Piers Mitchell from Cambridge’s Archaeology and Anthropology Department has just published research to the contrary. He says
“This latest research on the prevalence of ancient parasites suggests that Roman toilets, sewers and sanitation laws had no clear benefit to public health. The widespread nature of both intestinal parasites and ectoparasites such as lice also suggests that Roman public baths surprisingly gave no clear health benefit either.” (My Bold)
“It seems likely that while Roman sanitation may not have made people any healthier, they would probably have smelt better.”
In 1767 a domestic shower was invented, which involved using a pump to raise water to a header tank, and a chain-pull release, but it had a major (to the modern mind) drawback because it re-cyled the same water for the next use. Also (my italics)  it "failed to catch on with the rich, as a method for piping hot water through the system was not available."

Amazingly, it was not until 1850, nearly 1500 years after the Roman systems fell into decay, that reliable indoor plumbing again allowed free-standing showers to be connected to a running renewable flow of water.

I was also amazed to find that the early European hot showers which followed were all large communal systems intended to save money in large institutions like barracks of the French army in the 1870s. A prison(!) replaced individual baths with mandatory communal showers for use by prisoners, arguing that they were more economical and hygienic. These showers were taken up by prisons and the military across Europe. By 1899 they were being adopted in boarding schools and public bathhouses.
It curious to think that prisons introduced such luxury well before the public got a look-in!

These early systems were by nature utilising economies of scale, and used large externally heated boilers.

It took the invention of the electric automatic storage water heater in 1889 to enable domestic hot water systems, but by 1945 27% of households in this country still had no hot water service. This was down to only 1.1% by 1966.
In 1945 88% of households had either a bath or shower, this grew to 97.7% of households by 1966. I have not been able to find figures on the rate of shower uptake alone, but during my childhood in the Fifties my experience was that not everyone had a shower, many who did had the kind retro-fitted over a bath, and it was a bit new-fangled to have a built-in shower stall.
The home I grew up in was built in the 1930's and had an internally plumbed shower head installed above one end of a conventional enclosed enamelled cast-iron bathtub. I don't know if the shower was original or not.

Efficiency, as opposed to Luxury

Hygiene, as opposed to Luxury

Although Wikipedia's page on the Shower states: -

1.    "Shower usage in the latter half of the 20th century has skyrocketed. Personal hygiene became a primary concern, and bathing every day or multiple times a day is common among Western cultures. Showering is generally faster than bathing and can use less water."
2.    "Showering is mostly part of a daily routine primarily to promote cleanliness and prevent odour, disease and infection. Advances in science and medicine in the 19th century began to realize the benefit of regular bathing to an individual's health. As a result, most modern cultures encourage a daily personal hygiene regimen. Showering has also developed the reputation as a relaxing and generally therapeutic activity."

I am nevertheless intrigued to note that no mention is made of more recent ideas concerning the microbiome, the many species of billions of bacteria which we have evolved with resident in and on our bodies. Do we mess with the delicate balance by washing ourselves too often and/or by using chemical laden detergents, deodorants and soaps?

I gave up on deodorants over ten years ago after finding they made my armpits feel clogged and yucky. I also gave up on shampoo not long after, and only use water to wash my hair. My armpits are less smelly than before, and I haven't noticed any change at all with my hair itself, although dandruff has become almost nonexistent. The main thing I have noticed is the lack of money spent on the shampoo and deodorant.

There is a growing interest in this field, I even found a website that caters to this growing interest with a repository of information about the emerging field of the skin microbiome. Disorders such as atopic dermatitis, acne, skin ulcers, rosacea, perioral dermatitis, psoriasis, seborrhea and seborrheic dermatitis and many more appear to be caused or exacerbated by “dysbiosis”, an imbalance in the microbial community.

There are some who have found that, in general, we can forgo washing with soap or washing at all, except for when we are actually muddy or work-soiled, without becoming smelly and not nice to be near. Apparently after a week or two, once the bugs have battled it out and settled down, we end up smelling just, well, like a human. Ref. I haven't used soap or shampoo in a year, and it's awesome: a personal experiment, and This Man Hasn’t Showered In 12 Years, And He Doesn’t Smell.
Maybe the Ancient Greeks were right to discourage too many hot showers,
but I am not giving up mine any time soon!
Powered by