I thought it would be an interesting place to visit, with all those picturesque run-down old buildings, and idly wondered if I could find out where it was. A bit of searching found this local newspaper's piece revealing that "Lovett shot a video of the song and included clips of the LaSalle Hotel in Downtown Bryan". A search for this hotel brought up some current PR pix that didn't match the video, but a Google Streetview inspection of Bryan, Texas soon confirmed this as the location. What had thrown me off was an urban renewal project which had changed the area since the video was shot. See gallery below, courtesy of Google Streetview, a fantastic tool.

The Queen Theatre recent
I began to consider my feelings of disappointment that the scenes in the video are now gone forever. Being old enough to be able to step back and separate my own feelings from those of others, I was fully aware that, far from being disappointed, the citizens of Bryan, Texas might well be rather pleased that an area previously run-down and suffering from neglect had been rescued and brought back to life. I have to admit that it is nice to see the old buildings "restored to their former glory" amidst a more modern approach to the streetscape.

There was certainly better work done than in my home town of Auckland, New Zealand, where since the yuppie boom of the Eighties there has been much demolition and little inspired building. A great many historic and pleasing buildings were lost.
Ref. this piece by Michael Stevens in The New Zealand Herald, May, 2007

The views up Queen Street above are taken from where they are because behind the viewer is the waterfront, leading to Auckland's Waitemata Harbour. It has been said that the population of Auckland own more boats per head of population than in any other city in the world. Thus the bottom of Queen Street could be seen as the entrance from the sea into Auckland, and thus to New Zealand. Sadly the city has devoted this entry to a train station which faces a bus terminal.
I was prompted to consider an old travel theory of mine, that the best places to visit are those which once having been prominent, have suffered some loss of circumstance which rendered them unable to keep the economy turning over. This will result in a location which has much to inspect in terms of past art, culture and architecture, but which has not been over-written by further economic and architectural growth of later periods. I used this theory to choose many places to visit, and still consider it a worthwhile approach.

Some locations preserved by reduced circumstances

These examples are mostly chosen from personal experience. I have been to all of these except Oatman and Bodie.
Lavenham: - Wool Money

The Guildhall of Corpus Christi in the picturesque Suffolk village of Lavenham was built in the 1520s on the back of the high profits of the booming woollen cloth trade. Within a generation though, not only had the cloth trade crashed leaving Lavenham an economic backwater, but religious guilds themselves had been abolished by King Edward VI. Also Dutch refugees settling in nearby Colchester began making cheaper, but superior quality wool.
Aigues-Mortes: - Backwater (ha-ha) due to environmental damage, still preserved as a matter of course by the cultured French.

This previous trading hub town of old Malaya was saved from "progress" because it was successively conquered by European colonial powers, who disrupted the extant trading networks, the Dutch also were more interested in Batavia as a trading centre, then the British similarly with Singapore.
It was a fascinating multi-cultural historic town when I visited in 1992/93, but urban development has bitten hard in recent decades.
Santillana del Mar: - Conquistador wealth dried up. Preservation Enforced

The boom that followed the conquest of the Americas saw the construction of many mansions and palaces in this small town of Northern Spain, evidently that boom did not continue.

"Strict rules defining building regulations, dating back to the 15th century, and about who is allowed to drive into town, only locals or guests staying at hotels with garages, help retain a sense of timelessness. The streets are flanked with nobles’ and landowners’ houses dating back to between the 15th and 18th centuries and the real joy is to be found examining the craftsmanship that created these wonderful abodes." 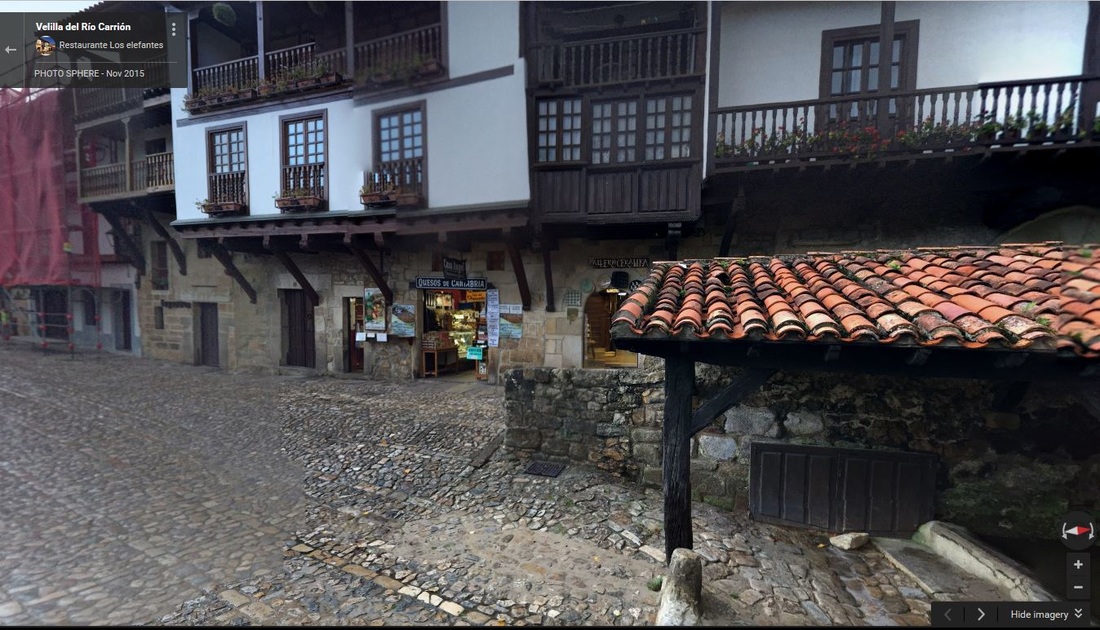 Click to Embiggen, for a 360 degree view. Velilla del Río Carrión, Santillana del Mar There has been no change since my visit in 1996.
Avila: - Frontier fortress, then the frontier vanished once the Muslims were finally defeated by Ferdinad and Isabella. Lucky to survive the Civil War.

A small town in central Spain, after the fall of the Western Roman Empire, Ávila became a stronghold of the Visigoths. Conquered by the Arabs (who called it Ābila, آبلة), it was repeatedly attacked by the northern Iberian Christian kingdoms, becoming a virtually uninhabited no man's land. It was repopulated about 1088 following the definitive reconquest of the area by Raymond of Burgundy, son in law of Alfonso VI of León and Castile. He employed two foreigners, Casandro Romano and Florin de Pituenga, to construct a stone frontier town and creating the walls that still stand.[6]
The city achieved a period of prosperity under the Catholic Monarchs in the early 16th century, and their successors Charles V and Philip II of Spain, but began a long decline during the 17th century, reducing to just 4,000 inhabitants.
In the 19th century, there was some population growth with the construction of the railway line from Madrid to the French border at Irun and an important junction near the town. In 1936, at the outbreak of the Spanish Civil War, the town quickly became part of the area occupied by rebel troops. Growth continued slowly again under Franco, but Ávila has not had a major influence in Spanish society in recent history....." 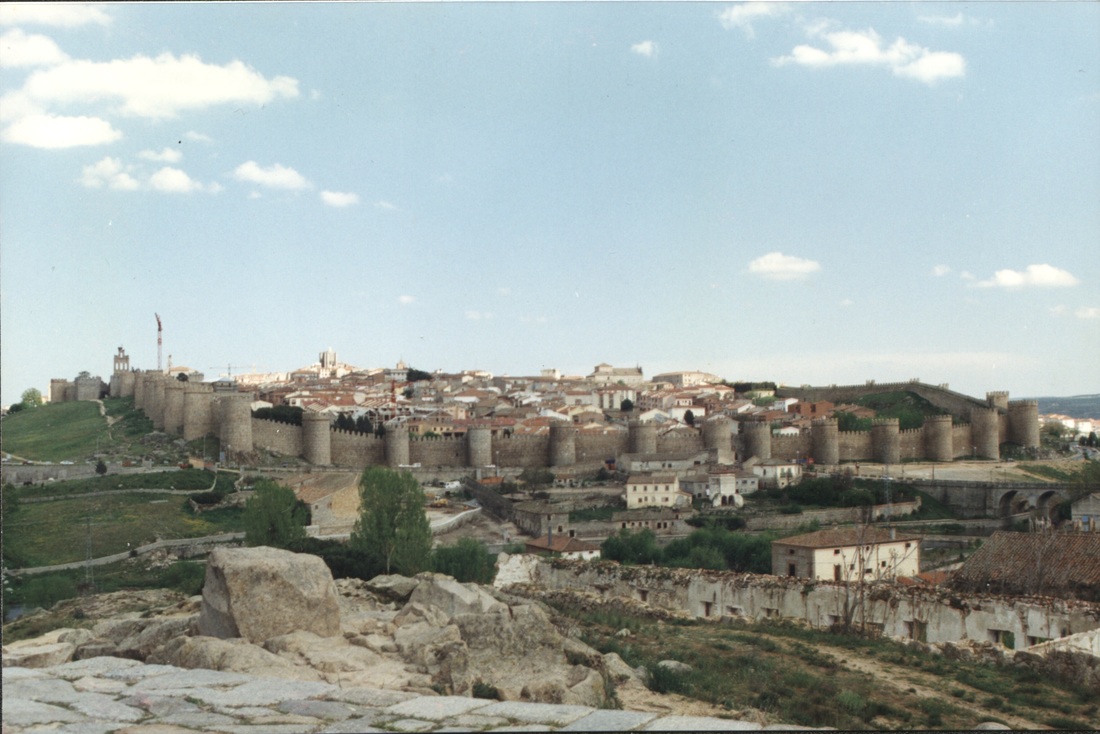 Avila when I visited 14/05/1996, showing the well-preserved city walls. Google Streetview shows little change within the walls since then, a little suburban creep outside though.
Oatman: - Mining ended. Badly done?

I learned of this town while writing my blog post on the picture of Olive Oatman, in whose honour the town is named.

1924 would see United Eastern Mines, the town's main employer, permanently shut down operations after producing $13,600,000 worth of gold (at the then government controlled market value of $20 per ounce; in today's gold market price of $1300 per oz. the equivalent gold value today is over $850,000,000). The district had produced $40 million (or $2,600,000,000 or so in today's market price) in gold by 1941, when the remainder of the town's gold mining operations were ordered shut down by the US Government as part of the country's war effort since metals other than gold were needed. Oatman was fortunate insofar as it was located on busy U.S. Route 66 and was able to cater to travelers driving between Kingman and Needles, California. Even that advantage was short-lived as the town was completely bypassed in 1953 when a new route between Kingman and Needles was built. By the 1960s, Oatman was all but abandoned.

Modern renewal: -
"Weekends in Oatman can see anything from classic car rallies to mock "Wild West" shootouts right down the middle of old 66. Independence Day celebrations include a contest where participants attempt to cook an egg on the sidewalk with the aid of solar devices known as the Oatman Egg Fry Along with the rest of Arizona's US 66 towns, Oatman is fiercely proud of its Route 66 heritage and replicas of 66's black-on-white US highway shield are posted all over the town. Route 66 souvenirs abound" 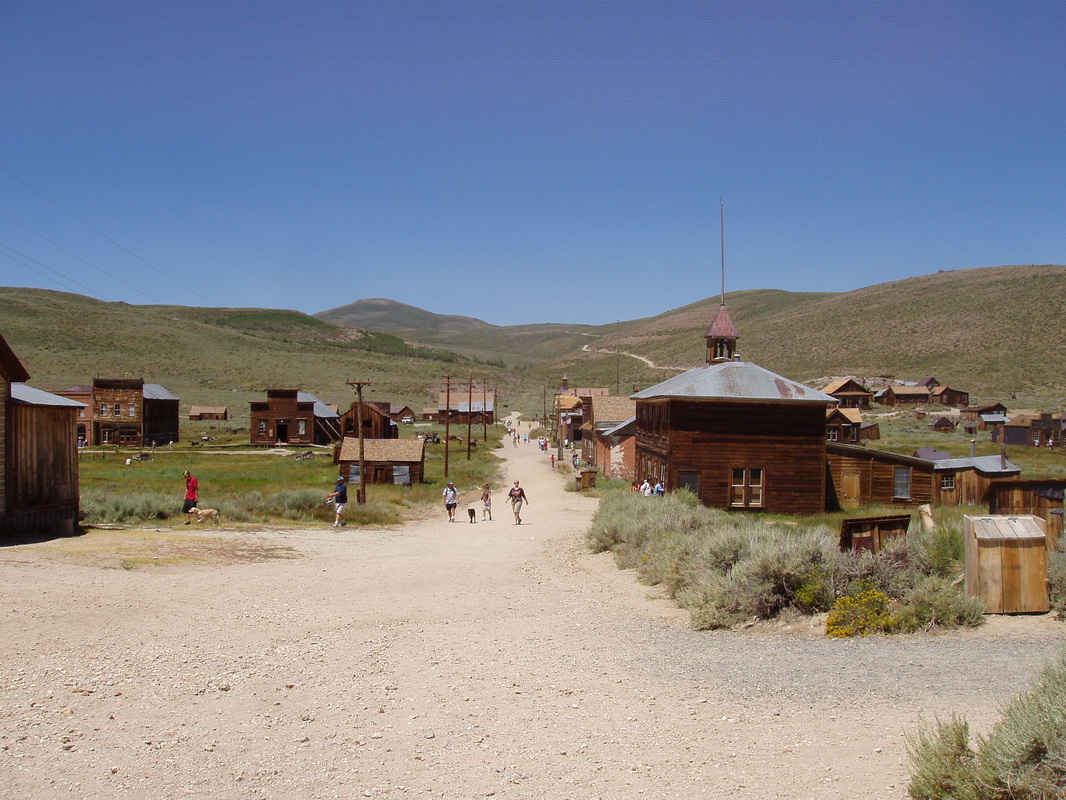 Click to Embiggen. There is a slideshow as well, there at Wikipedia.
Mérida: - Much has survived since Roman times, still a working modern town.

A town in western central Spain, Mérida is part of the Archaeological Ensemble of Mérida, which is one of the largest and most extensive archaeological sites in Spain. It was declared a World Heritage Site by UNESCO in 1993. It was essentially a Roman Army Retirement Village: -
"The town was founded in 25 BC, with the name of Emerita Augusta (meaning the veterans – discharged soldiers – of the army of Augustus, who founded the city; the name Mérida is an evolution of this) by order of Emperor Augustus, to protect a pass and a bridge over the Guadiana river. The city became the capital of Lusitania province, and one of the most important cities in the Roman empire. Mérida preserves more important ancient Roman monuments than any other city in Spain, including a triumphal arch of the age of Trajan."

I would have to say there were more and better Roman ruins in Spain than anywhere else I went in Europe and Britain, including Italy, with perhaps the exception of Rome's Forum, and inevitably, Pompeii and Herculaneum, which are unsurpassed.

Although I hadn't seen a lot of Europe at the stage I saw Mérida (Day 13 of 4 1/2 months), I remember being impressed by the way the place had embraced the fact that there were so many Roman remains interspersed throughout the urban fabric of the town. The tourist centre was well- armed with aids, and I recall a brochure with far more sites than I had time to see, all within easy walking distance, and nestled amongst the general working and residential buildings of the town. There was no "Historic Centre" enclave at all. 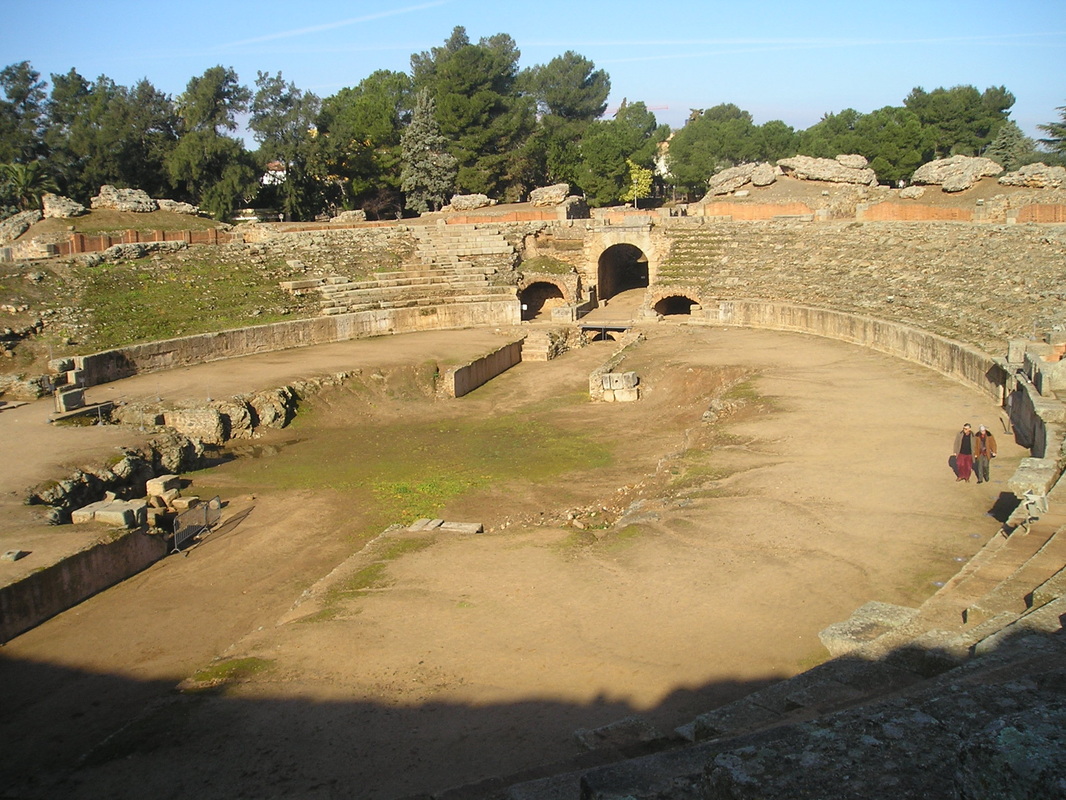 Click to embiggen. The Amphitheatre, Mérida.
Incidentally, the amphitheatre serves exactly the same function as the Colosseum in Rome, and every bullring in modern Spain and Southern France today. (See below)
Wikipedia on Roman amphitheatres: - "large, circular or oval open-air venues with raised seating – built by the ancient Romans. They were used for events such as gladiator combats, venationes (animal slayings) and executions. 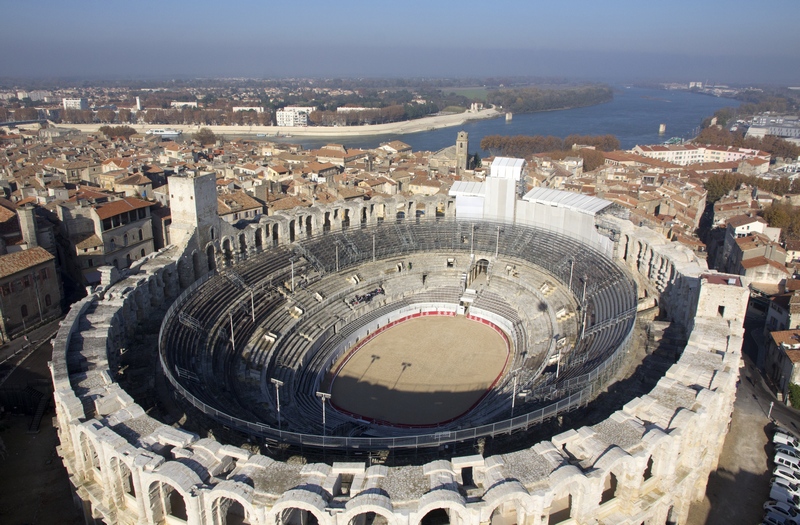