The Art of Memory, or just a mess? 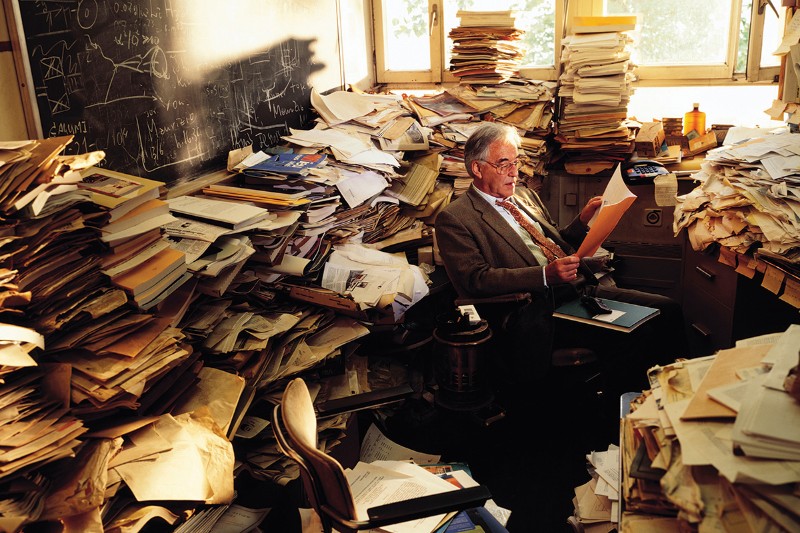 Portrait of Professor Dick, Leading Theoretical Physicist, in His Office
During my break at work, it is my habit to check the latest Science news. At the website of New Scientist magazine, I encountered the above, uncaptioned, as an illustration of an article entitled "AI tool scours all the science on the web to find new knowledge". However, it was not the article which interested me, so much as the illustration.

I laughed out loud when I saw it, and sent a link to a colleague. I remarked to my colleague that I bet he knows exactly where everything is and can still put his hands on it if necessary. I know from my own experience that I have books, brochures and clippings I haven't seen for twenty-five years, yet I know exactly where they are.

I became curious about the picture and subject. A little digging found the original as a stock photo by photographer Peter Ginter at the website ﻿Corbis Images﻿. The caption there reads: -
"One of the leading theoretical physicists of CERN, retired Professor Dick works in his office. Despite the look of his office, he is still the master of his universe. His individual stacking order is world famous since he only needs a maximum of 5 seconds to find ANY paper in his office. Many colleagues used his "filing" method to shortcut their own search for publications." (My Italics)


Now you might wonder how he could find anything in this apparent jumbled mess, but I do not. I believe what we see here is an ancient mental memory technique wrought large in the physical world.


The Ancient Greeks developed the earliest recorded memory techniques. I long ago learned of the technique called the Architectural Mnemonic, the invention of which is credited to ancient Greek poet Simonides of Ceos (c. 556 – 468 BC). As related in the Wikipedia entry "Art of memory";
"Simonides of Ceos, a famous Greek poet, [who] was invited to chant a lyric poem in honor of his host, a nobleman of Thessaly. While praising his host, Simonides also mentioned the twin gods Castor and Pollux. When the recital was complete, the nobleman selfishly told Simonides that he would only pay him half of the agreed upon payment for the panegyric, and that he would have to get the balance of the payment from the two gods he had mentioned. A short time later, Simonides was told that two men were waiting for him outside. He left to meet the visitors but could find no one. Then, while he was outside the banquet hall, it collapsed, crushing everyone within. The bodies were so disfigured that they could not be identified for proper burial. But, Simonides was able to remember where each of the guests had been sitting at the table, and so was able to identify them for burial. This experience suggested to Simonides the principles which were to become central to the later development of the art he reputedly invented."
"He inferred that persons desiring to train this faculty (of memory) must select places and form mental images of the things they
wish to remember and store those images in the places, so that the order of the places will preserve the order of the things, and
the images of the things will denote the things themselves, and we shall employ the places and the images respectively as a wax
writing-tablet and the letters written upon it."
As expanded on more formally at Wikipedia: -
Architectural mnemonic
The architectural mnemonic was a key group of techniques employed in the art of memory. It is based on the use of places (Latin loci), which were memorized by practitioners as the framework or ordering structure that would 'contain' the images or signs 'placed' within it to record experience or knowledge. To use this method one might walk through a building several times, viewing distinct places within it, in the same order each time. After the necessary repetitions of this process, one should be able to remember and visualize each of the places reliably and in order. If one wished to remember, for example, a speech, one could break up the content of the speech into images or signs used to memorize its parts, which would then be 'placed' in the locations previously memorized. The components of the speech could then be recalled in order by imagining that one is walking through the building again, visiting each of the loci in order, viewing the images there, and thereby recalling the elements of the speech in order. A reference to these techniques survives to this day in the common English phrases "in the first place", "in the second place", and so forth.
I believe that Professor Dick, rather than imagining mental locations, and mentally storing ideas in those imagined locations, has instead memorised the actual locations, and mentally stored the ideas within his memory of the physical layout of his office.
Can you imagine his devastation if some well-meaning person "tidied up" his office by installing filing cabinets and filing all the papers in date order, or alphabetical order (see blog to come on this!) of subject, or by name of correspondent? They may as well have done it by size of folder, for all the good it would do him!
Interestingly, the second technique listed at Wikipedia, the Graphical mnemonic, begins: -
"Because of the influence of the pioneering work of ﻿Frances Yates﻿, the architectural mnemonic is often characterized as the art of memory itself. However, primary sources show that from very early in the development of the art, non-physical or abstract locations and/or spatial graphics were employed as memory 'places'. Perhaps the most famous example of such an abstract system of 'places' is the memory system of Metrodorus of Scepsis, who was said by Quintilian to have organized his memory using a system of backgrounds in which he "found three hundred and sixty places in the twelve signs of the zodiac through which the sun moves". Some researchers (L.A. Post and Yates) believe it likely that Metorodorus organized his memory using places based in some way upon the signs of the zodiac."

And in the main body of the entry we find:
"Perhaps following the example of Metrodorus of Scepsis, vaguely described in Quintilian's Institutio oratoria, Giordano Bruno, a defrocked Dominican, used a variation of the art in which the trained memory was based in some fashion upon the zodiac. Apparently, his elaborate method was also based in part on the combinatoric concentric circles of Ramon Llull, in part upon schematic diagrams in keeping with medieval Ars Notoria traditions, in part upon groups of words and images associated with late antique Hermeticism, and in part upon the classical architectural mnemonic. According to one influential interpretation, his memory system was intended to fill the mind of the practitioner with images representing all knowledge of the world, and was to be used, in a magical sense, as an avenue to reach the intelligible world beyond appearances, and thus enable one to powerfully influence events in the real world.

﻿Refer my previous post on the book Frances Yates and the Hermetic Tradition by Marjorie G. Jones, and my previous post on the book ﻿The Quest for Hermes Trismegistus by Gary Lachman, where Frances Yates and Giordano Bruno both feature.
I note also the narrow minds of the followers of Jesus have struck once again, contributing to the loss of memory of these admirable techniques. Wikipedia again: -
"One explanation for the steady decline in the importance of the art of memory from the 16th to the 20th century is offered by the late Ioan P. Culianu, who argued that it was suppressed during the Reformation and Counter-Reformation when Protestants and reactionary Catholics alike worked to eradicate pagan influence and the lush visual imagery of the Renaissance."

As a final observation, I am rather cynical regarding the efficacy of the original New Scientist article's featured software.

"Semantic Scholar, launched this week by the Seattle-based Allen Institute for Artificial Intelligence (AI2), can read, digest and categorise findings from the estimated 2 million scientific papers published each year. Up to half of these papers are never read by more than three people. The system aims to identify previously overlooked information and connections with other research."

The only fly in the ointment here is that according to the very same website "Most scientific papers are probably wrong".
From the article: - "But Solomon Snyder, senior editor at the Proceedings of the National Academy of Sciences, and a neuroscientist at Johns Hopkins Medical School in Baltimore, US, says most working scientists understand the limitations of published research.
“When I read the literature, I’m not reading it to find proof like a textbook. I’m reading to get ideas. So even if something is wrong with the paper, if they have the kernel of a novel idea, that’s something to think about,” he says."

This "Semantic Scholar" software had best take the same approach, if it can be made to do so.


More recently, and quoting the same source as New Scientist, we have a worrying article "The Truth Wears Off -
Is there something wrong with the scientific method?" from website "The New Yorker".

And, it better watch out for just plain false papers, as tested by journalist Tom Spears at Canada's National Post last year: -
"It’s the ‘worst’ science paper ever — filled with plagiarism and garble — and journals are clamouring to publish it"

However, not all is lost, more recently there is some hope here in a February 2015 article "Scientists Are Wrong All the Time, and That’s Fantastic" at Wired magazine's site.

Refer also my previous post "The Scientific Process: Until Proven Otherwise. Some things that used to be facts"

Just to keep it light, here's someone's idea of "10 Most Bizarre Scientific Papers", but they obviously are unaware of the annual Ig Nobel prizes!
Powered by