The Futility of Ranking Cultures

Before I proceed, I want to present the original source of the image I spotted.

​From the Yale Collection of Western Americana, Beinecke Rare Book and Manuscript Library,
here are Olive and her brother Lorenzo, who was 15 when clubbed and left for dead. He awoke to find his parents and family dead, but no sign of sisters Mary Ann and Olive. He eventually reached a settlement where he was treated.
I thought these images quite striking, they look so much like anyone alive today.
Note the tintypes are mounted in a little case, presumably once a personal or family possession.

​It is not the usual photograph.
​It is an early process called the tintype, which could be developed and fixed,
and handed to the customer only a few minutes after the picture had been taken.
​It was on metal, (not actually Tin), and was more robust than glass or later paper. 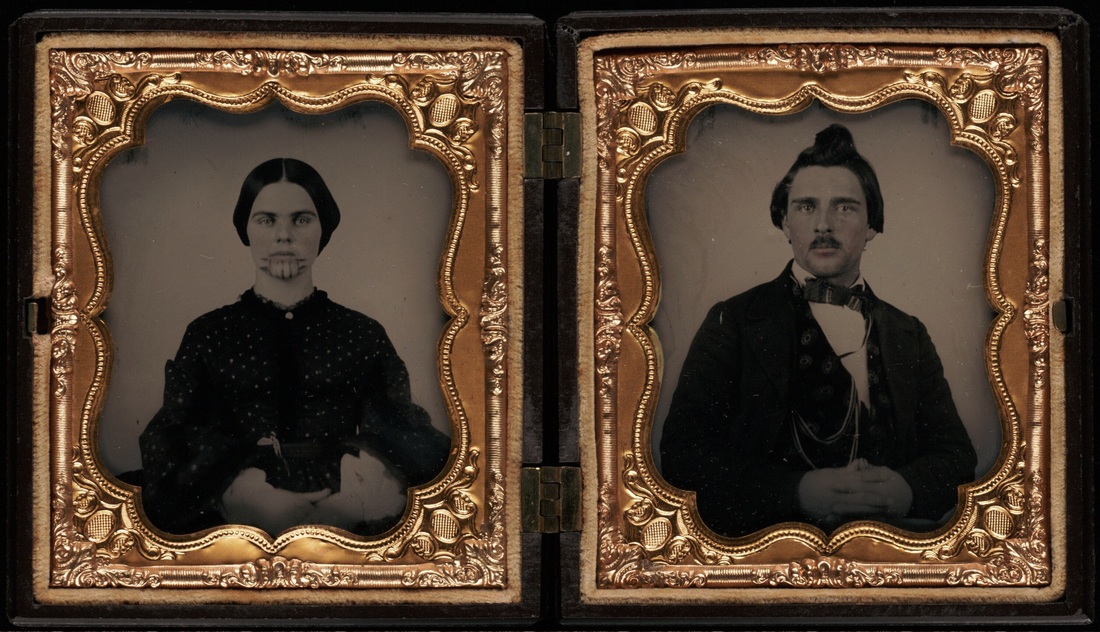 Tintype portraits of Lorenzo D. Oatman and Olive Ann Oatman - Yale Collection of Western Americana, Beinecke Rare Book and Manuscript Library
What led me further on in this story was the statement in the myth-debunking article that "Olive cried into her hands when she was delivered to the U.S. Army at Fort Yuma. She paced the floor and wept at night after she and Lorenzo moved to Oregon to live near their cousins. A friend described her as a “grieving, unsatisfied woman” who longed to return to the Mohave. And when Olive heard that a tribal dignitary named Irataba was traveling to New York in 1864, she went to visit him."

This got me thinking that Olive's experience reminds us that cultural values are largely relative.

This is an observation I made at about age thirteen, when I concluded the "Table Manners" I had been taught as a youngster had virtually no value, since belching, eating with the fingers, scraping plates, licking plates and eating off plates other than your own were all considered OK, and even desirable, in at least one other culture around the world. This is the kind of thought I often kept to myself, as I had learned that voicing such ideas earned remarks like "Don't be smart!" (Uh, sorry for thinking!), or "Well you aren't there, you're here, and will do as you're told! (Yeah, so ignoring facts makes you right?). This is what I was up against!.
Then recently I was watching a television documentary by English presenter Ray Mears, who is interested in the knowledge required to live off the natural products of the land, and how various human cultures both now and in pre-history have achieved this. In a program filmed in Australia, "Ray Mears Goes Walkabout" E04, he covered the historical experience of the Scottish girl Barbara Thompson, a castaway at thirteen in 1844, who was adopted into an Aboriginal tribe living on an island at Cape York. They normally killed intruders but she was spared; one of their leaders had recently lost a daughter, and believed Thompson was her returned spirit.     I have seen nothing to say Thompson was reluctant to leave, but she did empathise with her Aboriginal rescuers enough to attempt to smooth relations between them and those on the ship she left on.

I did find other Australian incidents; two such are described on this page for a program on the Australian  ABC Radio.
One was James Morrill, who lived with Aboriginals for 17 years, also attempting, but unsuccessfully, to act as a go-between in encounters with the British when they turned up. "In 1863, soon after he joined the British community, he published a pamphlet describing his time with the Birri-Gubba. In it he wrote of his feelings of love and friendship for them and the difficulties of leaving them. Nevertheless, they were disappointed at his inability to alleviate their suffering. Morrill died in 1865 at the age of 41, less than three years after returning to colonial society."

There was also Narcisse Pelletier, a French cabin boy who at 14 was shipwrecked in 1858 on the coast of Cape York Peninsula. He was adopted by Aborigines as well. He "was kidnapped by British trepang (sea cucumber) hunters near today’s Lockhart River on Cape York and returned to his native France. The British men, brandishing guns, believed they were rescuing him. He regarded himself as kidnapped."
"Though initially welcomed in his home village of Saint Gilles, he was exorcised by a priest at the request of his family and taunted by locals for his ‘savage’ appearance and ways. Angry, isolated and yearning for his Aboriginal past, he married but had no children. In 1894, at the age of 50, he died of unknown causes. Locals believed he’d succumbed to primitive nostalgia for the life and people of the Sandbeach."

​    What I believe these experiences show is that although many or most cultures believe it is only "natural" that those born and brought up in their parent's culture consider it the only right and proper way for human beings to live, when we find that people can be accidentally, willingly, or forcibly introduced to and live within cultures not native to them, and yet come to value them as highly as their own, we must concede that there is no impartial template which can be applied to judge the relative value of different human cultures.
This gives us a strong basis for concluding that if cultures must compete, it cannot be on a basis of some percieved intrinsic value.
We must abandon both touchy-feely affection, and racism, and adopt a more rational evaluation based on utility, and, nowadays, sustainability.
I don't believe this constitutes a threat, or attack on any one culture's values, for any culture will, can, and has adapted and changed in the light of new knowledge. I can give an example with which I am familiar; that of the New Zealand Maori, who were very quick to adopt many technical and agricultural techniques they observed were useful to the Europeans who arrived here and could not be prevented from staying. Maori had been overseas and observed European culture in its birthplace; they were not forced to, but enthusiastically began adopting many enterprises, such as establishing agricultural trade by growing wheat and milling flour, and growing potatoes, supplying Europeans with products they themselves had introduced.
​
​                                               The below are from Te Ara, the Encyclopedia of New Zealand.
​    Nevertheless, Maori have retained a strong sense of their own cultural values, adopting what they felt necessary, but not abandoning all for a wholesale conversion to European ways.
It appears I have argued myself into the position of Secular Humanism!

Secular humanism posits that human beings are capable of being ethical and moral without religion or a god. It does not, however, assume that humans are either inherently evil or innately good, nor does it present humans as being superior to nature. Rather, the humanist life stance emphasizes the unique responsibility facing humanity and the ethical consequences of human decisions. Fundamental to the concept of secular humanism is the strongly held viewpoint that ideology—be it religious or political—must be thoroughly examined by each individual and not simply accepted or rejected on faith. Along with this, an essential part of secular humanism is a continually adapting search for truth, primarily through science and philosophy.