20th Anniversary of Departure for TOSOTW

The other side of the world (TOSOTW) is a place I have actually been to. On this date in 1996, I and my Ex set off on the so-called trip of a lifetime, an extended driving tour of Western Europe and Britain. Before we left, a yacht-owning friend brought his GPS to my house and I recorded the exact Latitude and Longitude. It is a simple matter to calculate the exact antipode of my house, and whilst driving around Europe, I made a point (ha-ha) of visiting that location (as near as I could get without invading private property).

From where I live close to Auckland, New Zealand, the antipode falls in the South of Spain, in the mountains about 50 km almost due North of Gibraltar. I can now sit at my dining table and direct visitors' attention to a modest crystalline rock safely ensconced in the China cabinet, which is an actual piece of the Earth from a point straight down through the Earth from where they are sitting.

It is amusing to think that when I was a child I was led to believe that if you dug a hole deep enough it would "go all the way to China". How this strange belief was formed and transmitted to me I have no idea. Almost anywhere in China has an antipode in the ocean either side of the tip of South America!

New Zealand being an English colony, you might expect this to be an English saying transmitted to us, but they seem to know that NZ is actually close to their Antipode, and actually refer to NZ & Australia as "The Antipodes". Apparently the saying is more American, of obscure origin, and doesn't do much to shatter the stereotype of Americans hardly being aware of the world outside.

I am not the only person to make this observation, here at the Condé Nast Traveler site, in an article entitled "Ken Jennings on the Real Reason You Can't Dig a Hole All the Way to China" we find the intriguing observation that "...there are almost no land areas on Earth that are antipodal to each other. China is opposite Argentina, and Antarctica is opposite northern Canada and Greenland, but except for small islands, that’s pretty much it. In 2006, the Internet comedian Ze Frank called for the preparation of an “Earth sandwich”—the simultaneous dropping of two pieces of bread on the ground at a pair of land antipodes, making the Earth into sandwich filling for the first time in history. Two of Frank’s fans responded to the call, one laying down bread in Spain, and the other in Auckland, New Zealand. But at almost any other spot, an Earth sandwich would have to be open-faced, or it would be all wet."

Below is a great map to show this, courtesy of a site promoting Spanish wine, they make the point that NZ wines are grown in a similar latitude to the Spanish.

The Tour of Europe

As for my driving tour, what a wonderful experience that turned out to be.

My  Ex can take the credit for designing the itinerary. She had a great interest in painting both as a painter, and a student of art. At some stage she procured as a study requirement, a substantial tome, The Story of Art by E. H. Gombrich I believe. When we began to consider making a tour of Europe, she went through the book's illustrations, noting the works she wished to see and the locations they hung, be it great galleries like the Louvre, the Prado and the Uffizi, or humble churches or chapels with a Giotto or Constable altarpiece.
These locations were marked on the map and thus the framework for our tour was laid. It led to an interesting mix of famous landmarks and off-the beaten track locations. My input consisted of insisting we spend much more time in Spain than just Madrid and Barcelona, as I was deep into an infatuation with Flamenco music, including dance lessons, and there was no way I could pass up the opportunity to see more of the country whose culture and history I had been studying so closely, especially Andalusia, the heart of Flamenco.

After stopping over in Hong Kong for a few days, we arrived in Europe at Paris, went by rail to the city centre for a few days, then picked up a hired brand-new little diesel Peugeot 306? hatchback with 19km on the clock, and set off to drive and camp our way around Europe and Britain as per the map below. As it was Spring, my strategy was to head as far South as possible as soon as possible, before it got too hot in Spain. Then we worked our way North, as far East as Budapest, and back to Paris for a much-needed few days in luxury under a hotel's roof, before catching the TGV to Calais, the Channel ferry to Dover, and picking up another small car to drive and camp around Britain from Land's End to John o' Groats, ending up once again in a hotel in London. Then it was a direct flight to an extended stopover of three days in Macau and one in Hong-Kong, including a day trip on bus and train into China, before flying home.

It must be stressed (ha-ha) that in no way was this a holiday. After flying to Hong Kong, two days of sightseeing, flying to Paris and  three days of sightseeing, at the end of the second day of driving I wrote in my diary "We've spent heaps to be utterly terrified by aeroplanes, heights, motorways, traffic, directions, & the prospect of loss or theft. We are tired, footsore, aching all over, poorly rested, uncertain, apprehensive, scared shitless, and have sore eyes (Pollution I guess). However we hope we'll get into the swing of things, it's early days yet." We later came up with our little mantra to be recited when feeling tired: - "We're not here for a holiday, we're here to see as much as possible for as little as possible". It did get better, and a routine of seeing a town or two and finding a campground every day became relatively easy, although still tiring.

Roughly NZ$25,000 all up.
This worked out to roughly $10 per waking hour, so if an attraction had a queue we would not bother if the waiting time cost more than the entry fee! Saved a lot of boredom that way too.

Nearly four and a half months, 4 May to 13 September.

Nothing pre-booked except hotels in Paris, London, Hong Kong & Macau.
Every day we had to find a campground from our guide books.

36 rolls of 35mm film costing over a thousand dollars to print and mount.

Uncountable cathedrals. (Although an atheist, I never tired of the architecture.)

Too many palaces. (They annoyed me to think of all the peasant labour which paid for such excessive decoration!)

Only about four really wet nights in the tent.

One stay in a B&B (After a storm in England).

One camping ground owner who offered to sell the whole camp to us!

One hostel on a map that hadn't been there on the ground for 14 years!

One incident of paying motorway toll to a rubbish bin.

One spider bite and swollen arm (My Ex)

NO instances of being lost. (There were quite a few missed motorway exits and wrong turnings though!) 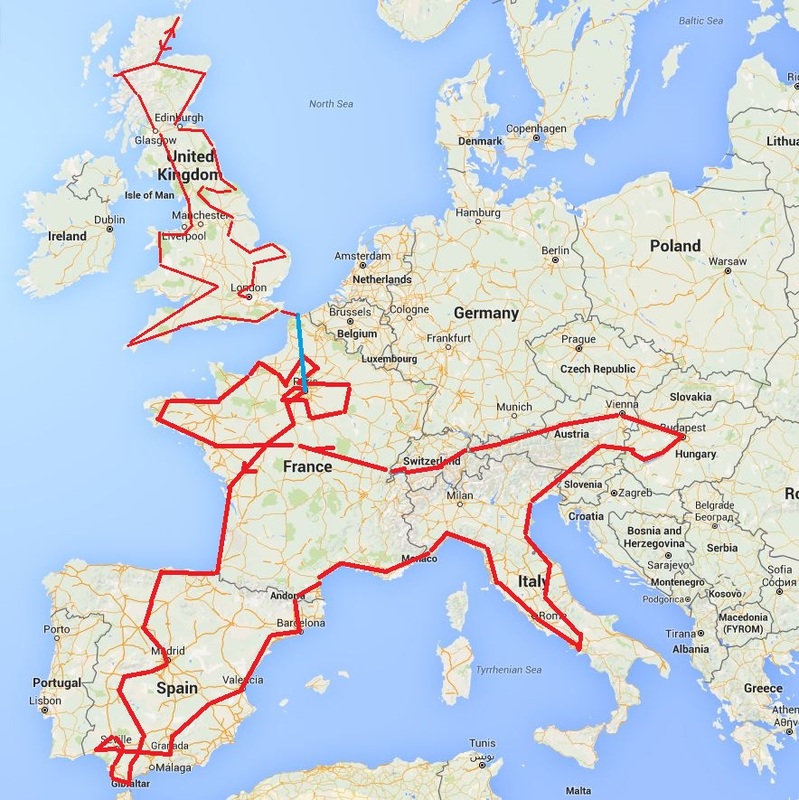