From Spain To Jamaica, via Connecticut!
My old 10 inch LP leads into the history of recording:
Carlos Montoya - Fiesta Flamenca      Nixa      SLPY 140

I was knowledgeable enough to pass up on anything that was not "genuine" Flamenco, consequently I was intrigued by this unusual record. The title had my imagination conjuring up a romantic picture of a "real Gypsy gathering", although intellectually I knew this was not on the cards. For a start, he was a top-level professional performer who spent a lot of time in the USA, and secondly, genuinely authentic down-home Gypsy Flamenco recordings are very rare, about as unlikely as a live production of a New Zealand  family at an afternoon tea, singing Happy Birthday to a Grandmother.

Slideshow of the Nixa 10 inch LP

I found I really liked the recording, it sounds very clear and just has a nice live, informal sound to it, with rehearsal/warm-up sounds etc., although I suspected it was probably a pretty formal studio recording.

All of the information which follows is newly-researched, other than what can be seen actually printed on the cover.

Sadly, they have not had anyone list my record, and I still have no date for the release. I will be creating an entry myself. (Done, 30/9)
Discogs only lists two others in the series, an Argentine Tango one, and an Italian player of the Hawaiian guitar, of all things!

For more information I checked Wikipedia's entry on the Nixa label: -

I did find more information, but sadly no clues relating to my record other than the statement " Nixa was the second company, after Decca, to release LP records in Britain. At the time, EMI was attempting to promote 45 rpm records over 33 LP records." I don't know yet how early this record is, rather vaguely it says "The shellac records were pressed for Nixa by the Decca Record Company. Later, Nixa made licensing arrangements with a number of US classical music record companies, including Period Records, Concert Hall Records, Haydn Society and Vanguard Records, to manufacture and market their catalogues in the UK and British Commonwealth." This record might be the result of a similar licensing from Cook.
Naturally I was keen to find out more about this LP as it seemed, given the "Cook" annotation on my pressing,
likely to be the source of mine.
However, I found two candidates from the Cook label, 10271, and 1027.

The page for Cook Records at Discogs really stimulated my curiosity

"Emory Cook (1913-2002) was an audio engineer and inventor who used his "Sounds of our Times" and "Cook" record labels to demonstrate his philosophy about sound, his recording equipment, and his manufacturing techniques. From 1952 to 1966, Cook recorded, manufactured, and distributed some of the highest quality audio recordings in the world. The 140 titles on Cook Records include European and American concert music, U.S. and Caribbean popular and traditional music, as well as mechanical and natural sounds........"

I was disappointed to find that nobody had created an entry at Discogs for Cook 1027. There is one for Cook 10271, which is no help as it only names El Niño De Almaden, and has no release date.
I also found Cook 10289, Patterns in Flamenco, also by Montoya, and noted that it was also released by Nixa, as it is listed on the back of mine as Nixa's SLPY 141.

I looked up Cook Records at Wikipedia and a fascinating story unfolded: -

Mr. Cook was definitely a man ahead of his time. He came up with the concept of stereo recordings (the "BINAURAL" mentioned above), designed his own pressing process and machines, founded his own company, and "in 1952, they were first to produce commercial stereo records..."

He designed his own, improved record presses, AND came up with an idea to make records at the point of sale!: -

"the Cook presses were each not much bigger than a refrigerator. At some point it occurred to Emory Cook that it might make more sense for some record shops to press the records themselves, as customers requested them, rather than to pay shipping and stocking costs. The result was that by 1958 there were record shops on Caribbean islands from Puerto Rico to Trinidad that had a Cook record-press in the back of the store. Some of the owners of these small shops, or their associates, began recording local music themselves. They shipped the master tape recording of an album up to Cook, and (for about $100) he made a metal mold of it, which was shipped back to the record store, which, when asked for a copy of the record, would pull the mold for that record from the shelf, fill it with the powdered vinyl (which was sprayed from a device resembling an old-fashioned hair dryer and was covered the mold exactly), and then popped it in the oven-cum-high-pressure press. (See the history of Reggae music for an idea of the impact this innovation had.)"  This explained why, to my surprise, while looking for Cook cover pictures, I came across a number rubber-stamped "Made in Jamaica".

At the side of the Cook Records page at The Smithsonian Folkways site, I spotted a link "Download the Finding Aid and Cook Recordings Inventory".

This looked like real gold, and proved to be, I was finally able to find a recording date, and also explain the Cook 1027 / 10271 differences.

The Finding Aid proved to be a List of Documents held by the Institute, but unfortunately the documents themselves have yet to be digitised for on-line viewing. A tantalising glimpse only.

However, the Cook Recordings Inventory contained the following entries, listed by Recording Number: - 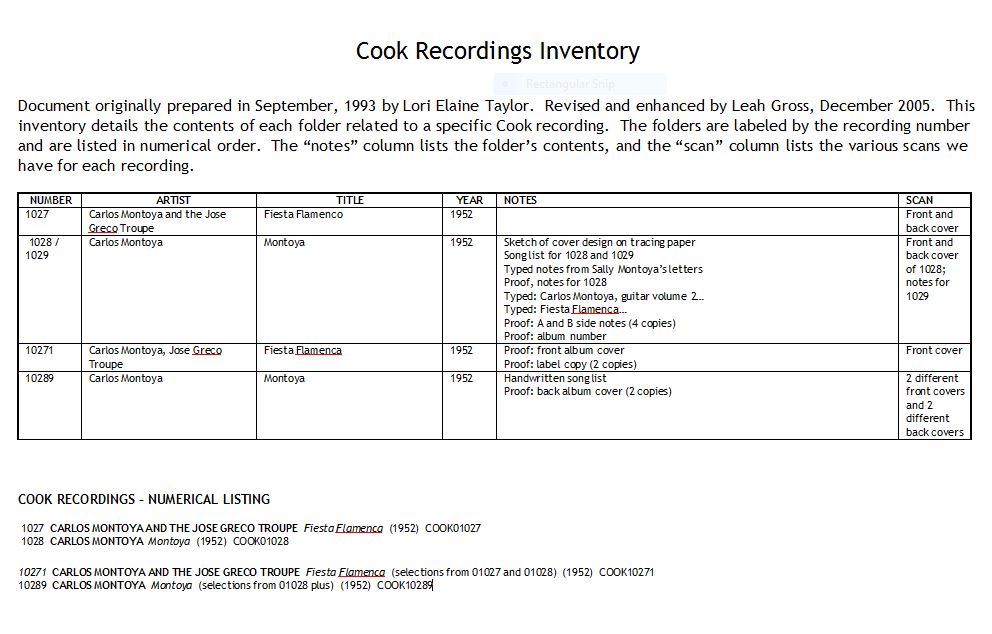 The first thing I noticed was that the Cook 1027 recording is credited to Carlos "and the Jose Greco Troupe". At this point I made a massive diversion to research the connection with José Greco, who is an unusual performer and a story in himself.
I have two of his 12" LPs, also from Real Groovy, 1995, at $5.95 each, but the artists on my record are not listed on them.
José Greco and Company - Danzas Flamencas Decca DL9758 (recorded in Spain, made in USA)
José Greco - Noche de Flamenco MGM-MCS-5007 (Mine is a NZ pressing)
He was born in Italy, raised in New York, and is one of very few non-Spanish to find fame in the Flamenco world. He toured the USA in the 50's and 60's. "Greco's ensemble completed a 1951 U.S. tour with the Flamenco artist La Quica that solidified his reputation."
I have looked at El Greco's line-up lists in old newspaper reports and filings of old programs, and find:
Juanele Maya, male dancer, was in the line-up for the initial 1951 tour and remained with Greco for years.
Salome de Cordoba, earliest reference I found is as a "New Face" in January 12 1953, Brooklyn Daily Eagle "Tonight Century Theatre for 2 weeks". Greco appears to have a largely new cast compared to the 1951-2 tour above. (The show-biz "Seasons" ran from June to May)
Chinin de Triana, singer, earliest reference I found was their next engagement January 29-31 1953 near New York at the New Parsons Theatre, Hartford, Connecticut.
Now, Cook Laboratories is also in Connecticut, at Stamford, only about 80 miles away from Hartford, and Carlos Montoya lived for decades at Wainscott, Long Island, 117 miles away. I think there is a good chance the recording was made about then, or perhaps late in 1952 before touring began. (Thanks Google Maps!)
The next engagement I could find was February 9, 1953 for a week at the Shubert, Philadelphia, they may have had a break, or  maybe I just couldn't find the intervening show/s.
Trianita Montoya was not mentioned at all in connection with José Greco, but a little searching clarified that Carlos Montoya's wife Sally Montoya, née McLean, performed as "La Trianita".

I found some nice pix of young Juanele and Salome in a program for Jose Greco and his company of Spanish Dancers listed as from 1954, but the notes in it refer to Juanele as "First time in America last season", which would be correct for 1952/53, and also state "last season was their initial engagement in the United States at the Shubert Theatre NYC."  This is incorrect for 1954, true for 1952/53. It also annotates the pic of Nila Amparo as "(On Temporary Leave of Absence)". This would tally with the Brooklyn Daily Eagle report above, which states "In place of Nila Amparo, his wife, who is expecting a child shortly, Jose Greco will have Lola de Ronda as his partner and feminine lead." I couldn't find Nila Amparo again in a cast list until they appeared a year later, fresh from NYC, at The Capitol Theatre, Salt Lake City,February 15 & 16 1954, the year this program is supposed to be from.
Thus we see: -

That my recording is from 1952, close to my guess.

That the other artists on my record are his wife and three artists from the Jose Greco troupe.

That 12" Cook 10271 contains tracks from my 10" LP, AND, supposedly, from another 10", COOK 1028.
I re-examined the rather poor picture of the back of Cook 10271, and found you can just make out that it does mention Fiesta Flamenca, and lists the performers, also their roles, which is more than is done on the original release. This will be where the YouTube posting got the credits I wondered about.

That there is still a puzzle, as COOK 1028 is supposed to be Solo Guitar, so where does Niño de Almadén come into the picture? He doesn't appear anywhere in the Cook Recordings Inventory document.

I have a 1997 CD, a re-release of an LP from 1974 (Update 17/10: Just bought this LP!), which features Niño de Almadén with Mario Escudero, see above!
According to the bio of Niño de Almadén at label Chant du Monde, he was highly thought of by Carlos Montoya's father, Ramon, and was successful "abroad", i.e. not in Spain. Possibly he got to the US. I have searched and cannot find anything which would confirm he is actually on the Cook 1028 or Cook 1029.

I can only conclude that the Institute's notes are incorrect regarding 10271 having tracks from 1028 or 1029, which are both definitely solo releases. Ref.  slideshow below, note that the pictures of the backs can be EMBIGGENED to a readable size.

It is hard to understand why this person bothered, as he seems to have made no effort to transmit the sound of the record at any decent level of quality. Rather than taking a feed from the turntable or amp, this appears to be a crude recording of his speakers made with the camera's microphone. (Shakes head in wonderment and exasperation.) Why would someone interested enough in the tonearm and record to make and post a video, do so with such a feeble recording of its sound?
Powered by