Galloping galaxies! Careering through the cosmos 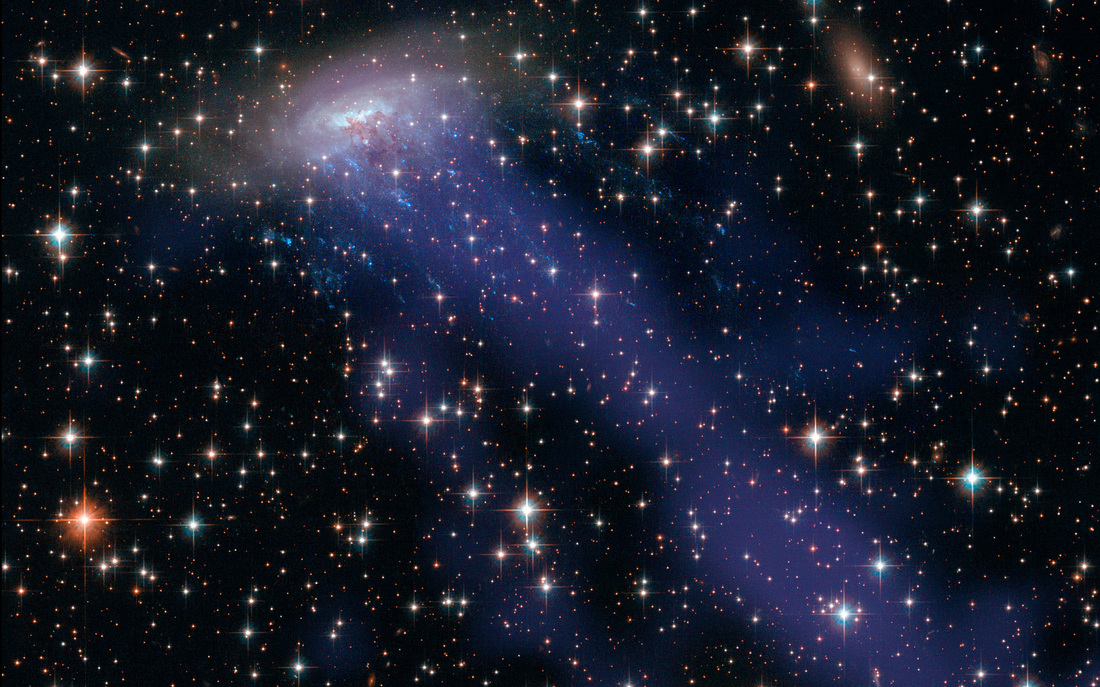 Astronomy Picture of the Day, 2015 August 1, "Stripping ESO 137-001" Click for NASA page.
This astounding picture I encountered recently is almost too gigantic and epic in scope to be comprehended by the human brain.


Impossibly distant at 220 million light years away, although nearby in astronomical terms (known universe diameter is about 400 times bigger) is an obscure galaxy known only as ESO 137-001.

It is part of a massive galaxy cluster, Abell 3627, which contains a thin but superheated plasma at its centre.

The gas is so thin there is only one particle in a cube 10 meters on a side. A particle can expect to travel on average about one light year before hitting another!  (Our atmosphere has 2.7 × 10^25 molecules per cubic meter, each expecting a collision within 69 nanometers. It is these collisions which transmit sound pressure waves through the air.)

This galaxy is moving so fast, at 7 million kph, that it is being stripped of the gas and dust within it by the speed of its passage through the intergalactic plasma, despite the plasma being so thin.

This is what forms the blue trail in the picture above.

The Chandra X-ray Observatory space telescope has been used to show us where X-rays are produced by interactions between the intergalactic medium and the gas and dust stripped from the galaxy. (normally invisible, but shown here in blue)

The galaxy itself is shown us in near visible light by the Hubble Space Telescope. (Hubble sees ultraviolet, visible light and infrared, the original caption doesn't specify which, but I think maybe UV, see below)

In the trail just close to the galaxy are bright blue trails where the turbulence has produced spots dense enough for the gas and dust to collapse together under gravity's pull into the hot balls of matter we call stars. (Hot young stars are characterised by shining brightly with ultaviolet light which is presumably shown above as light blue.)

The trail spans 400,000 light-years toward the bottom right, 0.55% of the distance to the galaxy. Even at 7 million kph, the galaxy has taken 62 million years to cross this scene, so at such a massive distance and time, this "action shot" appears stationary to us.
Imagine being born on a planet orbiting one of these stars, to find out that your whole solar system is just a bit of cosmic foam left in the wake of this cosmic dash of billions of stars through space!
Powered by