Tom Corbett: A Trip To The Moon

A short piece on my efforts to track down a children's picture book I remember from when I was about eight years old or so.
The other day I was telling someone that I have always been interested in Space Exploration and Science Fiction, (See my later blog post Science Fiction: The lure of "What if?") and how I have always remembered my first grown-up tie. (Back then little boys got clip-on bow ties first.) It was dark green with red and yellow space-ships, planets and meteors on it. I also described recalling a children's picture book that I had at about eight years old or so.

Now we have the Internet, and I resolved to track the picture book down.

I thought it might be called something like "Billy and Betty go to the Moon". I remembered an image of two shiny-faced kids in an elevated lunar landscape, wearing the classic "fishbowl" clear helmets.

I searched for "1950s children's picture book "to the moon"", and it seems I'm not the only one with this interest. I found a great site dedicated to the subject, Dreams Of Space, and a tutorial site, : Old Children's Books. Neither had it.

I tried a Google image search for the same string and found (see postscript) a promising cover image that seemed to fit my memory, even if the title didn't. This gave me a title and author. A bit further down in the results was the same image, but that led to.........
Amazing! I haven't seen these images for at least fifty years, but they were immediately recognisable.

My memory wasn't so hot on the names though, it is Johnny and Janie, not Billy and Betty!
No wonder when the other day I decided I "just wanted" to buy a real vintage-style cowboy shirt..... 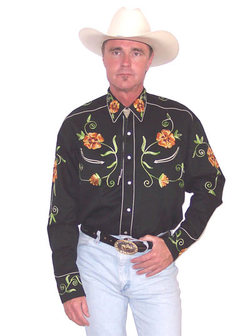 I really wanted to buy these two as well when I came across them at American clothing company Rockmount's website.
Postscript:
I first found just the cover on this cool page of vintage space images at magpie site Pinterest. It just reeks of my 50's childhood.