A list of proposed techniques, from the web or my own ideas;

together with some findings when applied (in blue italics).
I refurbished an old oak tea trolley back in the eighties, removing about 3 - 4 layers of ugly old pastel green and cream enamel, and removing a hack which had been done to give it a both a leaf which slid out from under the top shelf and a good 3/4" thick insert covering the top shelf. The tops of the legs and the top rails had been cut/planed to the level of the insert, unfortunately not reversible. This poor little light domestic trolley had been forced into heavy industrial servitude. I can just imagine it with a great big tea urn on the reinforced top, and a tea lady serving cups of tea from the extended shelf, in some big workplace cafeteria.

I know I dismantled it completely down to all 14 parts. I left the undersides of the shelves as found, just for the record, I guess. The shelves were from another time, not ply, but actual thin planks, edge-joined with glue to get the width required. It is amazing to think these edges were glued maybe 70 or 80 years ago, and look and feel as though there is no difference from a solid piece.

I don't remember what I used to reassemble it. Knowing me, I possibly tried to get away with no glue at all, in the name of conservation and avoiding work! Even though only very lightly used, it became a bit wobbly, and remained stationary as a clothes horse in the bedroom after I got divorced.Then recently I noticed a bottom rail dowel had actually broken and the shelf was sagging.

Time to get cracking and fix it up again! I decided I would try to make a better job of it than younger me did with just vague memories of school woodwork classes. Thus the below guide list was researched before starting. There are some extremely experienced and helpful old woodworkers out there on the net, who preserve and transmit knowledge and techniques going back practically to the dawn of time.

1. Try mallet and bar spreader (Will cramp work in reverse as a spreader?)

Yes it does. Took sash cramp heads off and reversed them. This got one end of the rails off the legs easily, a few, both ends.
For other ends, restored cramp heads, used to cramp the rail width to hold it (as I worked on the lounge floor without the garage vice), malletted leg off.
All stuck dowels stayed in holes in ends of rails, which are the holes with dowel grain in same direction as stock grain, thus the glue presumably works better.

2. Try alcohol on dowel, soaked for a while (First test the freed ends for a softening solvent that works?).

Meths worked as a glue softener when cleaning dowel ends.

2 – 4 all failed because I stupidly failed to notice the dowels all did not come out because they are not separate dowels, but turned out of the rails. The rail I worked on to find this out was the only broken one, so it still needed fixing, which will require drilling out the hole fruitlessly excavated looking for dowel to extract, another clean drilling at the other also broken end, and insertion of dowels. At least 2 – 4 did work for the broken ends still in the legs. Meths softened the glue OK.

Now not so keen on replacing all dowels as planned.

I have been researching so-called “Hide Glue”, as it is undoable, but seems as scarce as hen’s teeth in this country. It sounds great, both heat setting and soluble. This is the glue I remember sitting in a pot on the stove in the corner of the woodwork room at Pasadena Intermediate School in 1962-3. It is also the glue involved when they talk of sending horses to the glue factory. The Web suggests and I may try gelatine as a substitute.

1. Dowel must be just too tight to push in by hand.

All other turned ends seem a reasonable tightness after cleaning up. Also removed any old dirt, glue or varnish at the base of the dowel which could prevent full insertion into legs, and shaved the shoulder flat, both to prevent rail racking.

I actually found a maybe 20 year old 40” length of ½” dowel in the garage, which would have nicely done for the 16 x 2” dowels expected originally!

I have purchased a ½” twist bit and a ½” auger bit for this. The twist bit was used hand-held to clean out the hole mostly excavated by scalpel blade looking for dowel. The hole is a tad loose though.(see 4.) The other end’s remnants were cut off flush, then a scalpel was used to neaten the hole left by the break until it was centred, to be used as a guide for twist bits of increasing sizes until the auger could be started. A 1½” hole for repair dowel was then drilled, and also the first hole taken to that depth as well. Now ready for glue!

5. If too small, drill hole in steel.

7. Flute dowel by driving thru the jaws of vice-grips.

4 – 6 not required in this case as the dowel is not too big for holes.

I have purchased some domestic gelatine and tried a bit on some scrap, I think it was too dilute, but it looks like it will work.

The gelatine has worked well so far. I have glued the two dowels into the damaged end rail, and then glued the top & bottom end rails to the legs, giving me two complete ends. They are quite rigid with no apparent joint flexing.
It will be harder doing the front & back top & bottom rails which must be done all at once, so that I can cramp from both ends, while also including the top & bottom shelves in the assembly, all before the glue cools too much.

Final assembly now done. Assembled the side rails onto the shelves in advance, made the gelatine a little runnier to help with delay.
All in all a successful enterprise: 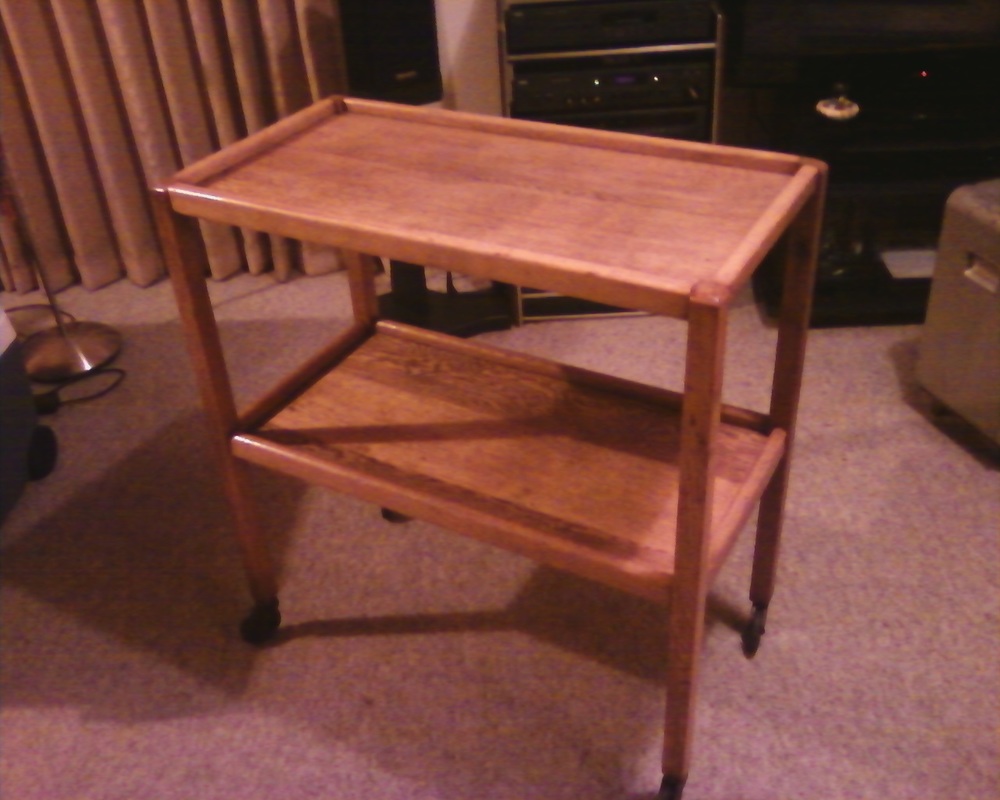